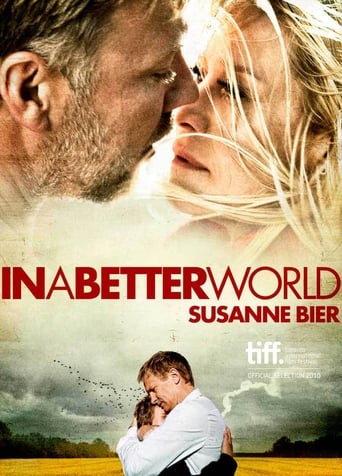 Kayla S 6 years ago
A++ Danish drama. i have fallen in love with every Susanne Bier film i have seen.

emilio murillo over 8 years ago
Appallingly moving story. Great and honest performances. A film that twists your insides.

Christian Gram over 5 years ago

Saeed bakhshandeh over 6 years ago

Kosala Liyanage over 7 years ago

Matteo Satta over 7 years ago

Victoria mears over 7 years ago

Sina Bakhshandeh over 7 years ago

Chu Yeow over 8 years ago

Kara Bombell over 8 years ago
"Few directors have addressed the issues of the past decade as courageously as Denmark’s Susanne Bier. With the much celebrated Brothers, she raised troubling questions about the First World’s relationship with the Third. After the Wedding pursued this subject further, contrasting the conflicting demands of the domestic and the societal. Her latest, In a Better World, explores similar terrain while offering a devastating critique of masculinity. In a war-torn African nation, physician Anton (Everlasting Moments’s Mikael Persbrandt) confronts a steady stream of tragedy and loss. Much of what he faces can be traced back to a vicious and sadistic local warlord. Back home in Denmark, his estranged wife, Marianne (Trine Dyrholm), is concerned about their eldest son, Elias, who is picked on mercilessly by the class bully, Sofus. When new kid Christian arrives in class, he and Elias bond over a mutual hatred of Sofus. Surly and vicious since the loss of his mother, Christian is hardening...
Read more on