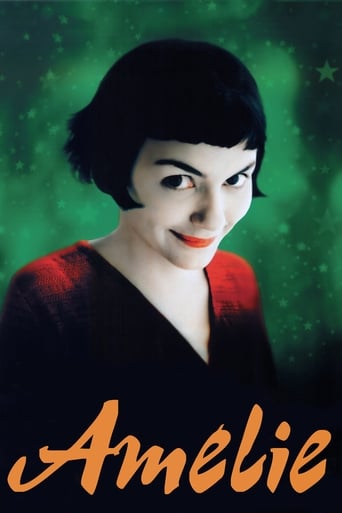 Yalini over 1 year ago
weird but really nice😍😍😍

Felipe Orrego over 3 years ago
A kind of weird, but then you understand and you like it.

Phetcharat over 4 years ago
Very weird (in a good way) movie.

Zoe Sak over 4 years ago
If you're not really into analyzing the stories, then it's not your type, but it fills you

Noah Rymer 5 years ago
it's fun and soulful nature may make you miss how brilliantly put together this film is.

Jonathan Evans 5 years ago
I can't remember when I saw this, but it's probably the reason I pursued a love of films.

Mark 5 years ago
Classic quirky french rom-com. Amazing what a haircut can do to create the required look.

D Tuck over 5 years ago
Beautiful and artistic - but the payoff is momentary. And crude humor sullies the film

Luispah almost 6 years ago
Simple, fresh, unique. one of the best movies I ever see. I hate the 90 charac restriction

Leif Jacobson almost 6 years ago
A unique and beautiful romantic film. Amelie will capture your heart. You'll want her to.

Tony Gandía over 6 years ago
Oozing charm & creativity, "Amélie" is a pastry of a movie. Sweet and bursting with color

Martin Peters over 6 years ago
Beautiful Film, Masterpiece, can watch over and over

Nadja Bester over 6 years ago
It got me then, & it got me now..life truly is beautiful when you march to a diff drum :)
Amélie (Original French title: Le Fabuleux Destin d'Amélie Poulain aka The Fabulous Destiny of Amélie Poulain) is a 2001 romantic comedy film directed by Jean-Pierre Jeunet. Written by Jeunet with Guillaume Laurant, the film is a whimsical depiction of contemporary Parisian life, set in Montmartre. It tells the story of a shy waitress, played by Audrey Tautou, who decides to change the lives of those around her for the better, while struggling with her own isolation. The film was an International co-production between companies in France and Germany. Amélie won Best Film at the European Film Awards; it won four César Awards (including Best Film and Best Director), two BAFTA Awards (including Best Original Screenplay), and was nominated for five Academy Awards. Amélie Poulain (Audrey Tautou) is a young woman who had grown up isolated from other children. After the death of her mother and her father's subsequent withdrawal, she developed an unusually active imagination to ward away the...
Read more on