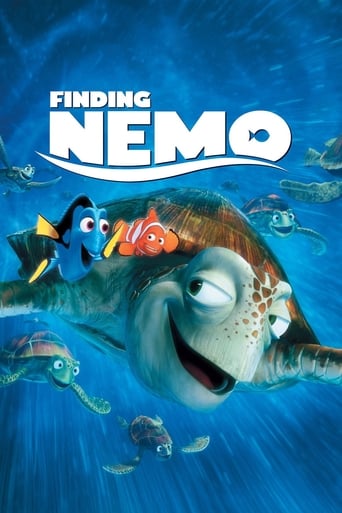 Amanda Mathews over 3 years ago
Dude! Classic for sure!

Phetcharat over 4 years ago
Boring.

Brandon Keck over 4 years ago
My son loves it, I love it. Secretly, a film examining different parenting styles.

Tony Gandía over 5 years ago
Visually stunning "Nemo" is a major coup. A funny cornucopia of brilliant colors.

Amy Charboneau over 5 years ago
So sweet. This is one kids movie that adults can enjoy.

Leif Jacobson over 5 years ago
Adventurous, thrilling, and touching. Excellent.

Freya 6 years ago
I kind of don't like Finding Nemo...and never did.

ashley lee 6 years ago
Such a great animated film!

Justine D. over 6 years ago
I must admit, if I like this film it is thanks to Ellen. Really funny. The rest is OK.

evelyn over 6 years ago
Loved this movie, its just really great movie to watch

ezhezh@gmail.com over 6 years ago
How could you not love Finding Nemo. If you haven't watched this movie, you're at a loss.

Dominique Bosman almost 7 years ago
How is it possible that this movie date from 2003? It's so beautiful, it hurts my eyes!!!

Dyah Agustine 7 years ago
Never get tired watching this one; Nemo and Dory are adorable.

Tara Moser 7 years ago
loved all the fish in this movie.
Finding Nemo is a 2003 American comi-drama animated film written by Andrew Stanton, directed by Andrew Stanton and Lee Unkrich and produced by Pixar. It tells the story of the overly protective clownfish Marlin (Albert Brooks) who, along with a regal tang called Dory (Ellen DeGeneres), searches for his abducted son Nemo (Alexander Gould). Along the way, Marlin learns to take risks and to let Nemo take care of himself. The film received overwhelmingly positive reviews and won the Academy Award for Best Animated Feature. It was the 2nd highest-grossing film of 2003, behind The Lord of the Rings: The Return of the King, earning a total of $868 million worldwide. Finding Nemo is also the best-selling DVD of all time, with over 40 million copies sold as of 2006 and it was the highest-grossing G-rated movie of all time, before Pixar's own Toy Story 3 overtook it. It is also the 5th highest grossing animated film of all time. It is currently the 26th highest grossing film of all time. In...
Read more on