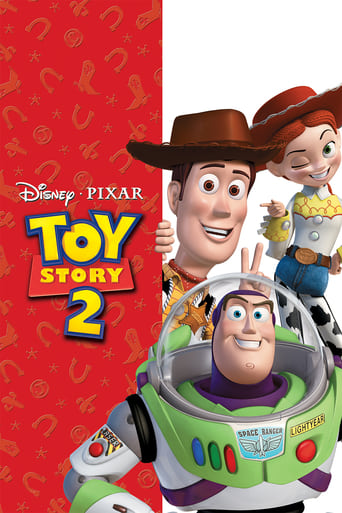 Amanda Mathews over 2 years ago
Bringing back beloved characters, introducing new. Not better, not worse.

Phetcharat over 3 years ago
Nothing new.

Leif Jacobson over 4 years ago
The first ever Pixar sequel, one which proves that sequels can be good if they have heart.

Matheus Yamashita Dos Santos over 5 years ago
Not as good as 1 and 3, but pretty nice!

Lachie Munro over 5 years ago
Good sequel, but not as beautiful as the first.

Jack Genius over 5 years ago
Prefer this one, just watched it. Loved the jokes about Star Wars and Jurrasic Park!

Lino Monteiro over 5 years ago
One of those rare examples where the sequel tops the original. Just as fun but better.

Dominique Bosman almost 6 years ago
Much better than its prequel, but still as charming like the first movie.

Justin L. Clemons 6 years ago
You got a friend in me...

Dyah Agustine 6 years ago
Are toys really loyal to their masters? It's kinda sad actually...

Thomas Jennings over 6 years ago
The best of the three? Maybe

Griffin Maurer over 6 years ago
Another Pixar classic. You can help but love these toys and their adventures.

Robyn Hamilton over 6 years ago
My least favourite of the trilogy but of course still great!

Frankie Linus over 6 years ago
The Toy Story Trilogy is my all time favorite animation movie.
Toy Story 2 is a 1999 American computer animated film directed by John Lasseter and co-directed by Lee Unkrich and Ash Brannon. It is the sequel to the 1995 film Toy Story, released by Walt Disney Pictures and the third film to be produced by Pixar. Toy Story 2 was released in the United States on November 24, 1999, in some parts of Australia on December 2, 1999 and the United Kingdom on February 11, 2000. Toy Story 2 was re-released in a double feature with Toy Story in Disney Digital 3-D on October 2, 2009. The film returns many of the original characters and voices from Toy Story with the voice talents of Tom Hanks, Tim Allen, Don Rickles, Jim Varney, Wallace Shawn, Annie Potts, John Ratzenberger, Joe Ranft, John Morris, and Laurie Metcalf. They are joined by Jodi Benson, Joan Cusack, Kelsey Grammer, Estelle Harris, and Wayne Knight, who voice new characters Barbie, Jessie, Stinky Pete, Mrs. Potato Head, and Al, respectively. Toy Story 2 was dedicated to the memory of Mary Kay...
Read more on