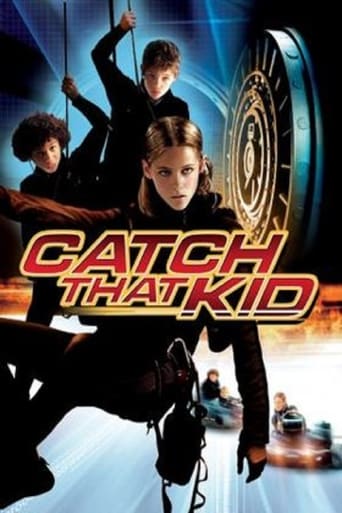 Amy Hendriks 4 years ago
I saw the original movie first, and somehow just can't get that one out of my head.

Zoe Nocturne over 4 years ago

Kamaria Niom over 5 years ago

Hannah Proctor 8 years ago
Catch That Kid! is a 2004 American adventure comedy film directed by Bart Freundlich. It is a remake of the Danish blockbuster Klatretøsen (2002). The movie's working titles were Mission Without Permission (also the film's UK title as well as part of one of the taglines), Catch That Girl, and Catch That Kid! Madeline Rose "Maddy" Phillips (Kristen Stewart) is a 12-year old girl who loves to climb. Her father, Tom (Sam Robards), has climbed Mount Everest, so it runs in the family. Several years earlier, Tom fell more than 100 feet during a climb, and because her parents are afraid she might hurt herself, they have ordered Maddy not to climb. Tom had some internal injuries from that earlier fall, which he didn't know, and now the injury has paralyzed him from the neck down. There is an experimental operation, costing $250,000, which can save him. Insurance won't pay for the operation, and the family doesn't have the money. Brisbane (Michael Des Barres) refuses to loan the amount and...
Read more on