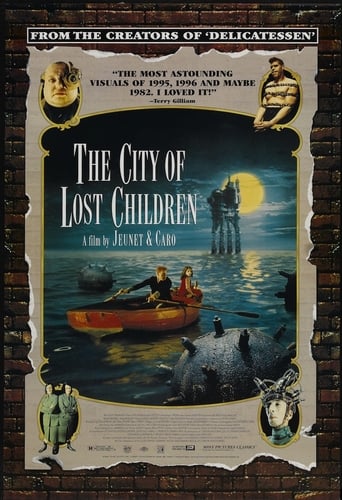 Natalie 7 months ago
It's a lovely French movie that I found to be enjoyable. .

Austin almost 6 years ago
As memorable and sincere a "children's movie" as you're going to find.

Natalie Novoa 8 years ago
my fav film of all times!

Addie Stone over 2 years ago

Alan DeCoronado over 3 years ago

Bloc Silent over 4 years ago
The City of Lost Children (French: La Cité des enfants perdus Spanish: La Ciudad de los Niños Perdidos) is a dystopian French fantasy/drama film by Marc Caro and Jean-Pierre Jeunet released in 1995. The film is stylistically related to the previous and subsequent Jeunet films, Delicatessen and Amélie. It was entered into the 1995 Cannes Film Festival. A mad scientist, Krank (Daniel Emilfork), kidnaps children to steal their dreams. Among them is the little brother, Denree (Joseph Lucien) , of carnival strongman One (Ron Perlman), who sets out to rescue him with the help of a young, orphaned, thieves' guild member named Miette (Judith Vittet). The film currently holds a 82% fresh rating on Rotten Tomatoes based on 34 reviews, and a Metascore of 73 on Metacritic. The film was a modest box office hit in France gaining 1,157,124 admissions; in North America it grossed $1,738,611, having had a limited run at a total of 36 theaters. A video game based on the film was released in the US and...
Read more on