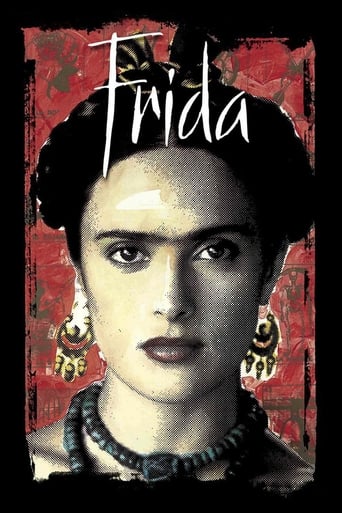 Yalini 12 months ago
She is quite cool

Robert Slowik over 8 years ago
intrigued by rivera, wanted to see the film, discovered frida kahlo

Milda over 1 year ago

Don Lathrop over 1 year ago

Gervie Lins over 1 year ago

Bethany Foster over 3 years ago

Miguel over 3 years ago

Annalisa Schettino over 3 years ago

Gervie Ebron over 4 years ago

Rosalio Galvan over 4 years ago

mariia over 4 years ago

Ryan 5 years ago
Frida is a 2002 biographical film which depicts the professional and private life of the surrealist Mexican painter Frida Kahlo. It stars Salma Hayek in her Academy Award nominated portrayal as Kahlo and Alfred Molina as her husband, Diego Rivera. The movie was adapted by Clancy Sigal, Diane Lake, Gregory Nava, Anna Thomas and Edward Norton (uncredited) from the book Frida: A Biography of Frida Kahlo by Hayden Herrera. It was directed by Julie Taymor. It won Oscars for Best Makeup and Best Original Music Score (recipient: Elliot Goldenthal). Frida begins with the traumatic accident Frida Kahlo (Salma Hayek) suffered at the age of 18 when a car trolley collided with a bus she was riding. She is impaled by a metal pole and the injuries she sustained plague her for the rest of her life. To help her through convalescence, her father brings her a canvas upon which to start painting. Throughout the film, a scene starts as a painting, then slowly dissolves into a live-action scene with...
Read more on