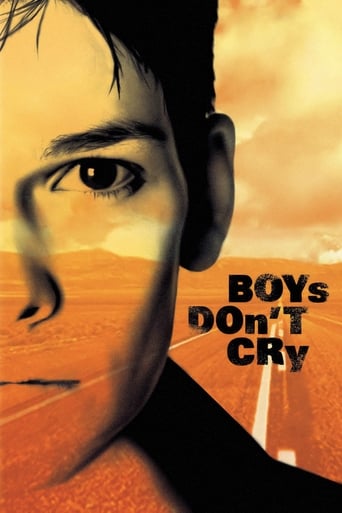 Kayley Sage over 3 years ago
This was Hilary Swank's greatest role! Sucha heavy movie, and carried it on her shoulders

Annika Løchte Taylor 6 years ago
Made time stand still for a while. Absolutely amazing story, which everyone can learn from

Ty Woulds over 6 years ago
Powerful & emotional. Pretty intense but well worth a watch!

Fae over 7 years ago
Hilary did fantastic, the movie was fantastic, but the realism of the movie makes me sick.

Ruth Angela Boraggina over 8 years ago
Very dramatic & heartbreaking. A true story that shows just how cruel the world can be.

Michelle Roussell over 2 years ago

Itzel Amieva over 3 years ago

Simon Taylor over 4 years ago

Parker Childers over 4 years ago

Ana over 5 years ago

Carola D'Agostino 6 years ago
Boys Don't Cry is a 1999 American independent romantic drama film directed by Kimberly Peirce and co-written by Andy Bienen. The film is a dramatization of the real-life story of Brandon Teena, a transgender man played by Hilary Swank, who pursues a relationship with a young woman, played by Chloë Sevigny, and is beaten, raped and murdered by his male acquaintances after they discover he is anatomically female. The picture explores the themes of freedom, courage, identity and empowerment. The film was distributed by Fox Searchlight Pictures and was released theatrically in October 1999. After reading about the murder of Brandon Teena while in college, Peirce intently researched the case—as well as Teena's life—and worked on a screenplay for the film for almost five years. All She Wanted, the 1993 book about the case written by Aphrodite Jones, inspired Peirce, but she chose to focus the story on the relationship between Teena and his girlfriend Lana Tisdel. Many actors campaigned for...
Read more on