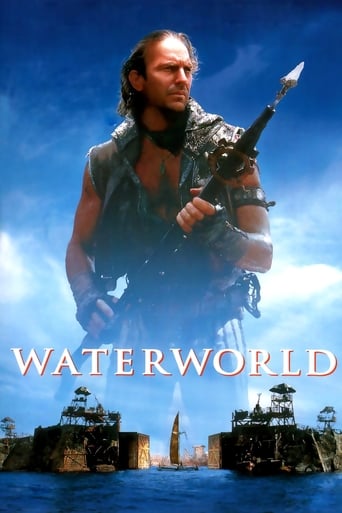 James Duckworth 6 years ago
Falls into the 'so bad it's good' category for me.

Robyn Hamilton 6 years ago
Constantly on TV and I watch it every time. Sure it's bad, but it's fun!

Fernando Olivas 6 years ago
hop on the hate wagon

Anthony Colombi over 6 years ago
Mad Max 2 it ain't.

Tavis almost 7 years ago
It's fun. Shut up.

Cody over 7 years ago
Last time I watched this I was in the hospital doped up on morphine. It was awesome then!

Herr Brisby over 7 years ago
Actually a good movie with a bad reputation. Good action - and Dennis Hopper is brilliant!

Levi over 7 years ago
One of those movies you either love or hate...should have been made 10 years later.

Stitch M 2 years ago
Waterworld is a 1995 post-apocalyptic science fiction film. The film was directed by Kevin Reynolds and co-written by Peter Rader and David Twohy. It is based on Rader's original 1986 screenplay and stars Kevin Costner, who also produced it. It was distributed by Universal Pictures. The film was the follow-up project to the last collaboration between Kevin Costner and Kevin Reynolds, who previously worked together on Robin Hood: Prince of Thieves in 1991. The setting of the film is the distant future. Although no exact date was given in the film itself, it has been suggested that it took place in 2500. The polar ice caps have completely melted, and the sea level has risen many hundreds of metres, covering virtually all the land. The film illustrates this with an unusual variation on the Universal logo, which begins with the usual image of Earth, but shows the planet's water levels gradually rising and the polar ice caps melting as well until virtually all the land is submerged. The...
Read more on