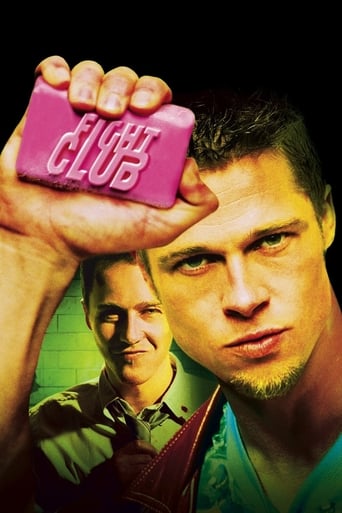 Luke Duncan over 2 years ago
Completely unique and unpredictable

Eric Brainard almost 3 years ago
One of my all-time favorites. There is more to it than you know. Don't talk about it.

Sriram Varma over 3 years ago
Amazing!!!

Lucas A Turney almost 4 years ago
Anyone who doesn't like this movie probably doesn't "get it." (The book is good as well.)

Núrya Inocentes over 4 years ago
Slide!

Steven Morehouse almost 5 years ago
Just stick it out to the end.

Evan almost 5 years ago
This movie is amazing. If you haven't seen it, get it and watch it RIGHT NOW! Trust me.

Malory 5 years ago
a good but a bit overrated movie, great story and excellent actors

Caio Borges over 5 years ago
S
Fight Club is a 1999 American film based on the 1996 novel of the same name by Chuck Palahniuk. The film was directed by David Fincher and stars Edward Norton, Brad Pitt and Helena Bonham Carter. Norton plays the unnamed protagonist, an "everyman" who is discontented with his white-collar job. He forms a "fight club" with soap maker Tyler Durden, played by Pitt, and becomes embroiled in a relationship with him and a dissolute woman, Marla Singer, played by Bonham Carter. Palahniuk's novel was optioned by 20th Century Fox producer Laura Ziskin, who hired Jim Uhls to write the film adaptation. Fincher was one of four directors the producers considered and hired him because of his enthusiasm for the film. Fincher developed the script with Uhls and sought screenwriting advice from the cast and others in the film industry. The director and the cast compared the film to Rebel Without a Cause (1955) and The Graduate (1967). Fincher intended Fight Club's violence to serve as a metaphor for...
Read more on