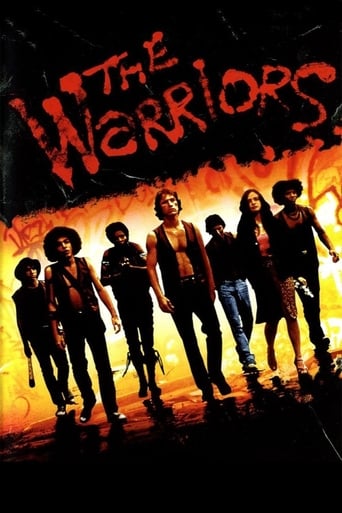 Eric Brainard over 1 year ago
So good. Gonna quote it, "Warriors, come out and playeeyay". It's a classic, easily.

Rachel Marshall almost 2 years ago
Apart from the fashion and music, this 1979 film seems far more modern than its age!

Paul Lanoue almost 5 years ago
It must have been warm in NYC. Nobody likes to wear shirts.

Lisa Harms over 5 years ago
"Can you dig it?!" Sort of. Unrealistic, bizarre gangs in the bleak 1970s NY subway system

Tony Gandía over 6 years ago
Not a cinema masterpiece but just cheesy fun set in 70s, "gritty" NYC streets.

Paul Kubon over 7 years ago
Simply my top favourite film of all time.

Grant davies over 7 years ago
seen it three times. dated but good.

Pasi Raiha over 8 years ago
I love the dark streets of NYC. And the Clockwork Orange-type of gangs.

Daniel Jones over 8 years ago
A gritty NYC setting for classic Greek literature works. Can you dig it?

Blair Lucas over 8 years ago
This movie is all about atmosphere. The cool, late 70's New York style is what makes this.

John Barton over 8 years ago
Best late 70s retelling of the Odyssey in a New York gang setting, bar none.

anon over 2 years ago

Michelle Roussell over 2 years ago

Itzel Amieva over 3 years ago

Annalisa Schettino almost 4 years ago
The Warriors is a 1979 American cult action/thriller film directed by Walter Hill and based on Sol Yurick's 1965 novel of the same name. Like the novel, the film borrows elements from the Anabasis by Xenophon. Cyrus (Roger Hill), leader of the Gramercy Riffs, the most powerful gang in New York City, calls a midnight summit of all New York area gangs, requesting them to send nine unarmed representatives to Van Cortlandt Park. The Warriors, from Coney Island, Brooklyn, are one such gang. Cyrus proposes the assembled crowd a permanent citywide truce that would allow the gangs to control the city. Most of the gangs laud his idea, but Luther (David Patrick Kelly), leader of the Rogues, shoots Cyrus and frames the Warriors. In the ensuing panic, the Warriors escape. Unbeknownst to the Warriors, however, the Riffs call a hit on them through a DJ (Lynne Thigpen), believing them responsible for Cyrus' death. Swan (Michael Beck) takes charge of the group and they head back to the subway. On the...
Read more on