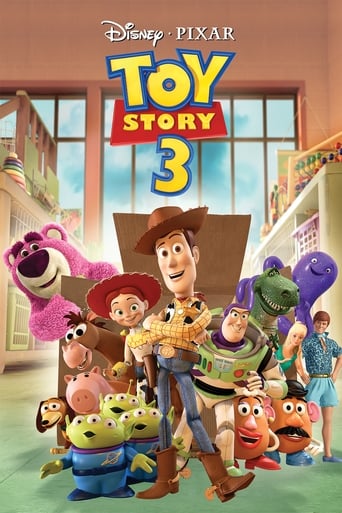 Jean Walton almost 3 years ago
Not as good as everyone says it is, but still quite solid. The ending is amazing. 3.5/4

Dónal Kennedy over 3 years ago
One of the most emotionally taxing films I've ever seen... Gut-wrenching and sublime.

Amanda Mathews over 3 years ago
I may or may not have cried. Beautiful addition.

Claudia González 4 years ago
A.K.A: Pixar did it again. Even adults were crying at the cinema.

Phetcharat over 4 years ago
Nothing new, but lovely somehow.

Núrya Inocentes over 4 years ago
Not as good as the original Toy Story, but it brings back the characters we all love.

Linda Imes almost 5 years ago
Was sad.Ending was very sad even though the kids wont get it.

Natalie over 5 years ago
i cried

Alexandra Sundarsingh over 5 years ago
Brilliant film. I am now emotionally rekt. Getting old is the worst. RIP childhood.

ashley lee 6 years ago
Leaps and bounds better than 2. I was in happy tears at the end!

Laura Vastenavont 6 years ago
a film about true friendship

Jack Genius over 6 years ago
Ohhh it brought a big smile on my face and also made me cry a little. Wonderful ending!

Lachie Munro over 6 years ago
I cried. In a kids movie. When I was an adult. This is wonderful!

Dominique Bosman almost 7 years ago
This is the best thing ever happened in my life. After this you could die peaceful!

Thomas Jennings 7 years ago
An admiral close, if nothing more.
Toy Story 3 is a 2010 American 3D computer-animated comedy-adventure film, and the third installment in the Toy Story series. It was produced by Pixar and released by Walt Disney Pictures. It was directed by Lee Unkrich. The film was released worldwide from June through October in Disney Digital 3-D, RealD and IMAX 3D. Toy Story 3 was also the first film to be released theatrically with 7.1 surround sound. The plot focuses on the toys Woody, Buzz Lightyear, and their friends dealing with an uncertain future as their owner, Andy, prepares to leave for college. Tom Hanks, Tim Allen, Joan Cusack, Don Rickles, Estelle Harris, John Ratzenberger, Wallace Shawn, Jeff Pidgeon, Jodi Benson, R. Lee Ermey, John Morris and Laurie Metcalf reprised their voice-over roles from the previous films. Jim Varney, who played Slinky Dog in the first two films, and Joe Ranft, who portrayed Wheezy and Lenny, both died before production began on Toy Story 3. The role of Slinky Dog was taken over by Blake...
Read more on