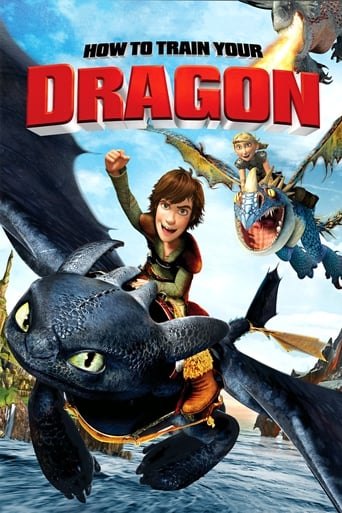 Yalini over 3 years ago
The bravest is the one with the kindest heart! really good movie

Amanda Mathews over 3 years ago
Super cute and made me fall in love with Pixar again.

Phetcharat over 4 years ago
Boring.

Samuele almost 5 years ago
if you traina dragon all it's possible, isn't it

Noah Rymer almost 5 years ago
more like an episode of a TV show than a film.

Leif Jacobson over 5 years ago
An underrated masterpiece of animation. Simply wonderful, and with great music too.

Magnus Tranum over 6 years ago
DreamWorks hits a home run once again with this fun and action packed family film.

Nara Bruck over 6 years ago
Entertaining from the first minute!! The score by John Powell is amazing!

Andy Whitfield almost 7 years ago
I like the take on dragons as cats. Fun, better than most kids films.

Dominique Bosman almost 7 years ago
The story is very usual, but I really fell in love with the music of John Powell, genius!

Rob Williams 7 years ago
Just an enjoyable film for all ages. easy to watch and interesting. Solid work here

Thomas Jennings 7 years ago
Least awful Dreamworks film for a while. Still has a bad case of smug.
How to Train Your Dragon is a 2010 3D computer-animated action fantasy film by DreamWorks Animation loosely based on the 2003 book of the same name. The film stars the voices of Jay Baruchel, Gerard Butler, Craig Ferguson, America Ferrera, Jonah Hill, T.J. Miller, Kristen Wiig, and Christopher Mintz-Plasse. It was nominated for the Academy Award for Best Animated Feature and Best Original Score at the 83rd Academy Awards, but lost to Toy Story 3 and The Social Network, respectively. The movie also won ten Annie Awards, including Best Animated Feature. The story takes place in a mythical Viking world where a young Viking teenager named Hiccup aspires to follow his tribe's tradition of becoming a dragon slayer. After finally capturing his first dragon, and with his chance at finally gaining the tribe's acceptance, he finds that he no longer has the desire to kill it and instead befriends it. The film was released March 26, 2010, to positive reviews. The film grossed nearly $500 million...
Read more on