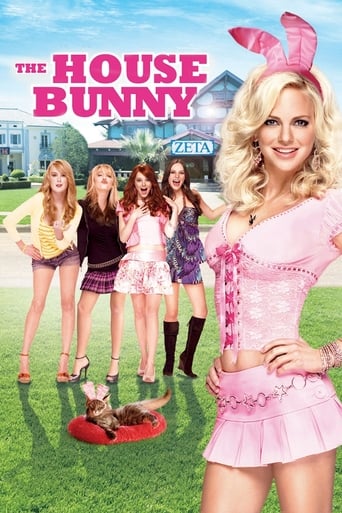 Cveti Kalcheva over 4 years ago
I think this is up there with Mean Girls.

Ester over 5 years ago
It's not horrible, but unless you're into these kind of movies, you're gonna be bored.

Giorgia over 1 year ago

Lauren Armstrong over 2 years ago

Mark Bezerman over 2 years ago

Cait over 2 years ago

Lisa Andrews over 2 years ago

Mariana over 2 years ago

Jessica Gross over 2 years ago

Kosala Liyanage over 4 years ago

vics over 4 years ago

Kristine Rayco over 4 years ago
The House Bunny is a 2008 romantic comedy film directed by Fred Wolf, written by Kirsten Smith and Karen McCullah Lutz of Legally Blonde, and starring Anna Faris as a former Playboy bunny who signs up to be the "house mother" of an unpopular university sorority after being conned by a rival into believing she's now too old by Playboy standards. The cast also includes Colin Hanks, Emma Stone, Kat Dennings, Katharine McPhee, Rumer Willis, Kiely Williams, Tyson Ritter, and Hugh Hefner. Shelley Darlington (Anna Faris) is an aspiring Playboy Playmate living the life of luxury in the Playboy Mansion. The day after her 27th birthday, she awakes to find a note, seemingly from Hugh Hefner, asking her to pack up and leave. Depressed, Shelley leaves in the old car she had arrived in when she first moved into the mansion. After getting in trouble with a police officer, and spending the night in jail, she happens to stumble upon a group of girls who remind her of herself: beautiful and fun. She...
Read more on