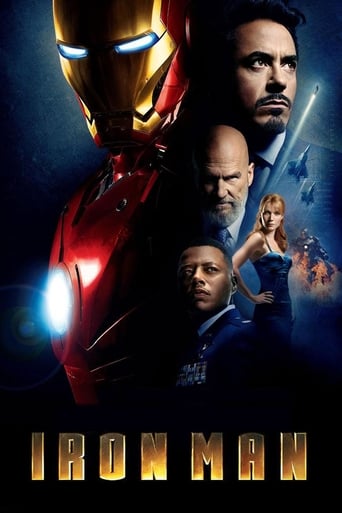 Jordan Feurstein over 6 years ago
Great action movie. Perfect casting and couldn't be more balanced with humour and effects.

Jessica Birnie 1 year ago
The first MCU film is still one of the best Iron man will no doubt forever be a classic.

BruceM over 3 years ago
Great movie - robert downey jnr is great - born for this role - does it his way :-)

Aaron Jones over 3 years ago
Downey Jr. was born for the role, I'll say that much. Good movie, good cast.

Amanda Mathews over 3 years ago
Action packed, witty and does what Marvel does best. Start of a new era.

Phetcharat over 4 years ago
Cool.

Johnny Nys 5 years ago
Nice to see where it all started. So Yinsen is the one who made it all possible.

Brandon Keck 5 years ago
Downey Jr bumps this film to a level few other marvel movies have been able to reach.

Jared Bennett over 5 years ago
The one that started it all. Without Iron Man, there would be no Marvel Studios!

Andrés Botero over 5 years ago
Robert Downey Jr. makes this a perfect adaptation of Tony Stark.

Christopher McLean almost 6 years ago
Still a near perfect example of a superhero movie. Excellent pacing, characters and action

Leif Jacobson almost 6 years ago
A good bit of summer-y, popcorn fun, and one that kicked of the Marvel Cinematic Universe.

diane over 6 years ago
Silly villian. Fun booms. Not a fan of this Rhoady. Good start to the series.

ashley lee over 6 years ago
Yes.

Justin L. Clemons almost 7 years ago
Great humbling story to right the wrong of an industry. Tony proves he is not the villain.
Iron Man is a 2008 American superhero film based on the Marvel Comics character of the same name. Directed by Jon Favreau, the film stars Robert Downey, Jr. as Tony Stark, an industrialist and master engineer who builds a powered exoskeleton and becomes the technologically advanced superhero, Iron Man. Gwyneth Paltrow plays his personal assistant Pepper Potts, Terrence Howard plays military liaison James Rhodes and Jeff Bridges plays Stark Industries executive Obadiah Stane. The film was in development since 1990 at Universal Studios, 20th Century Fox, and New Line Cinema, before Marvel Studios reacquired the rights in 2006. Marvel put the project in production as its first self-financed film. Favreau signed on as director, aiming for a naturalistic feel, and he chose to shoot the film primarily in California, rejecting the East Coast setting of the comics to differentiate the film from numerous superhero films set in New York City-esque environments. During filming, the actors were...
Read more on