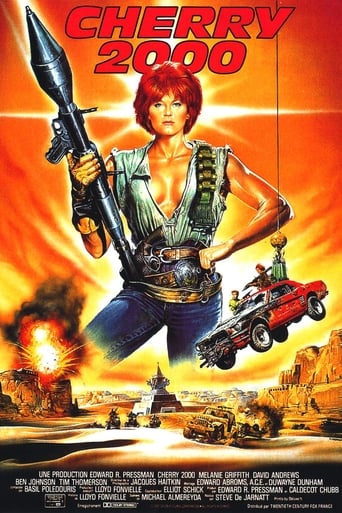 Devon over 4 years ago
Comical

Miguel over 4 years ago

Mike Faulkner over 6 years ago

Dan Poirier over 7 years ago

Juliana Davila over 7 years ago

Fernando Olivas over 7 years ago
Cherry 2000 is a 1987 science fiction cult film starring Melanie Griffith and David Andrews. In the year 2017, robotic technology has made tremendous developments. Business executive Sam Treadwell's (David Andrews) "Cherry 2000" android (Pamela Gidley), short circuits during a make out session on the wet kitchen floor. He is told by a repairman that she's irreparable and finding another Cherry android will be difficult since she was a limited edition. After removing the memory chip from the old unit, Treadwell searches for a replacement, enlisting Edith "E" Johnson (Melanie Griffith), a tough tracker who guides him into the wasteland interior of a post-apocalyptic United States. She is guiding him to an abandoned manufacturing plant where he hopes to find another Cherry 2000 model. Standing in their way is Lester (Tim Thomerson), a chipper wasteland overlord and his deranged subordinates. Cherry 2000 is widely known for the original score composed by Basil Poledouris. The soundtrack...
Read more on