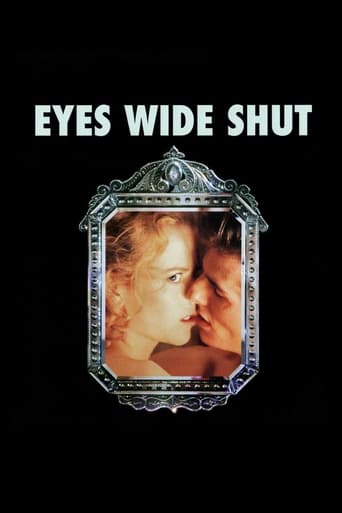 Daniel Lanciana over 3 years ago
Some weak acting.

Tony Gandía over 4 years ago
A rare tone deaf offering from Kubrick. Cruise/Kidman chemistry is non-existent.

Eduardo Clementino 5 years ago
Awesome film,specially if you suffering from insomnia.

Damian Campo almost 6 years ago
The handling of jealousy and sexuality is very original. Accessories are enjoyable.

Griffin Maurer almost 7 years ago
Kubrick's style kicks in with the second half. Where's the message? An unsolved mystery.

Taylor Reginald Wright 7 years ago
A glorious, multi-layered tale of the frailty of relationships and high-societal secrets.

Garrett O' Brien 7 years ago
Eyes wide shit, more like. Tom and Nicole acting stoned must be the worst acting ever.

Austin 7 years ago
UNDER-RATED! This film is yet another masterpiece from Kubrick.

Grant davies over 7 years ago
Ok just a little odd. Not Kubrick s best, by a long margin.

Emmet O Sullivan over 7 years ago
Kinda strange, but interesting

Robyn Hamilton almost 8 years ago
Still can't make my mind up about this one. Nicole and Tom are just such annoying actors.

Diana Riashko almost 8 years ago
Interesting idea, but didn't really understand why people regard it as anything special.

Zariel Guzman almost 8 years ago
just really good mannnn
Eyes Wide Shut is a 1999 drama film based upon Arthur Schnitzler's 1926 novella Traumnovelle (Dream Story). The film was directed, produced and co-written by Stanley Kubrick, and was his last film. The story, set in and around New York City, follows the sexually-charged adventures of Dr. Bill Harford, who is shocked when his wife, Alice, reveals that she had contemplated an affair a year earlier. He embarks on a night-long adventure, during which he infiltrates a massive masked orgy of an underground cult. The film appeared on July 16, 1999, to generally positive critical reaction. This was the last film to be directed by Stanley Kubrick before his death in 1999, and its actual release was posthumous. Although generally well-received by critics, the film proved controversial due to its strong sexual content, and its distributor Warner Bros. digitally altered several scenes during post-production to ensure a theatrical R rating in the United States and Canada. The uncut version has...
Read more on