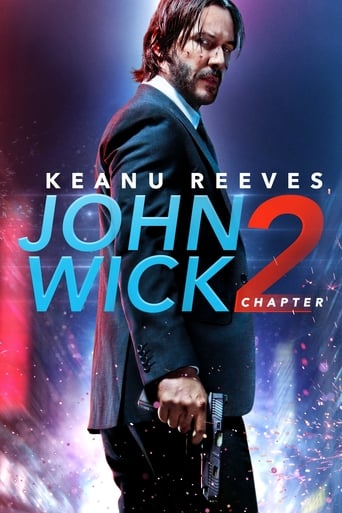 - +
Rate this film
Add a review
Delete Rating/Review Share Add to queue
In your queue
Remove it
John Wick: Chapter 2 2017

Dzenan Suljevic 11 months ago
Takes all that world-building from the first one and commits to it even more. Good action!

Eric Brainard 1 year ago
I liked the sequel more than the first. First was good too though.

Davis Keck over 2 years ago
I liked it more than the first, even though it still relies on cliches and poor dialogue.

Michael Cole almost 3 years ago
Some of the best gun fights I've seen.

Brandon Keck over 3 years ago
Not as good as the first. But, you know I'll be tuning in for Chapter 3.

Noah Rymer over 3 years ago
A very well made sequel, but it is starting to get very repetitious.

Paulinho Serrinha over 3 years ago
the first was better... this was too mutch for one man...

nicole over 3 years ago
Lacks simplicity and beauty from #1, but rewatchable and ready for #3!

Daniel Jones over 3 years ago
Much like the original, plenty of satisfying gun fu style action. Worth the ticket price.

Andy Whitfield over 3 years ago
Beautiful gun kata. Doubles down on its eerie world of assassins adding a sense of humor.

Freya 8 months ago
John Wick is forced out of retirement by a former associate looking to seize control of a shadowy international assassins’ guild. Bound by a blood oath to aid him, Wick travels to Rome and does battle against some of the world’s most dangerous killers.
×
Facebook Twitter