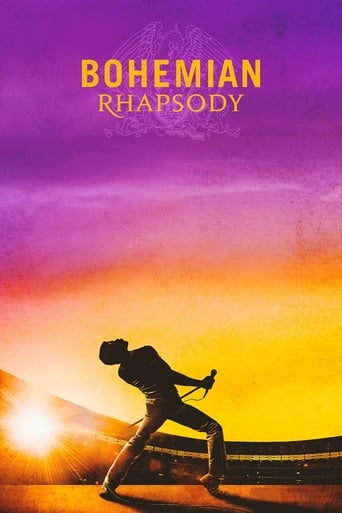 Lowfill Tarmak over 1 year ago
Freddy and Rami are both wonderful performers. Quite emotional film!

VS over 1 year ago
not bad, but could be even better! nice story, new facts, fantastic music

Becky over 1 year ago
Fine, by the numbers biopic. A+ cast & acting, music perfectly used.

nicole over 1 year ago
I loved everything about this. The casting, acting, soundtrack...more pls

Miranda Wright over 1 year ago
I LOVE QUEEN

Kayley Sage over 1 year ago
This is brilliant!!!

Courtney Bess over 1 year ago
I held my breath... and then let out an enormous sigh of relief.

Sydney Stene over 1 year ago
Not a life-changing movie experience, but well done and fun to rock out to nonetheless.

Marina Đukanović over 1 year ago
This was epic!

Julia G over 1 year ago
Looks at queen in a light that truly catches everything we love.

Movty over 1 year ago
Lol!

Daniel Jones over 1 year ago
The concert and studio scenes were the highlights. However, I loved the story, too.

Matthew Bettencourt over 1 year ago
Enjoyed it for the music/concert scenes. Everything else was paint-by-numbers.
Singer Freddie Mercury, guitarist Brian May, drummer Roger Taylor and bass guitarist John Deacon take the music world by storm when they form the rock 'n' roll band Queen in 1970. Hit songs become instant classics. When Mercury's increasingly wild lifestyle starts to spiral out of control, Queen soon faces its greatest challenge yet – finding a way to keep the band together amid the success and excess.
×
Facebook Twitter