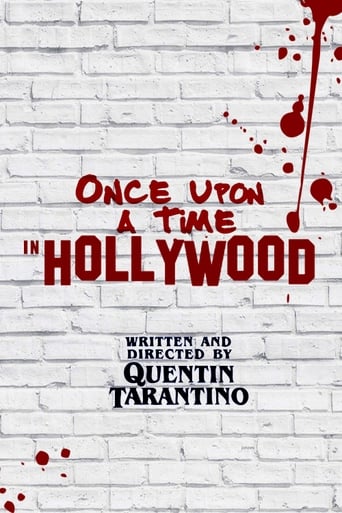 Andy Whitfield over 1 year ago
A hangout film that feels like it could have come from classic Hollywood...with Tarantino.

Daniel Jones over 1 year ago
There's a lot to like, such as the cinematography and performances, but overall falls flat

Dzenan Suljevic over 1 year ago
Great performances and some interesting bits in an otherwise uninteresting movie.

Miranda Wright over 1 year ago
OK so this was long. A little random. But. Wow. What an experience. WATCH THE ENDING.

Noah Rymer almost 2 years ago
I could write pages about my problems with this, but I will sum it up with "Pointless".

Annalisa Schettino over 1 year ago

Anastasia Loule over 1 year ago
A faded TV actor and his stunt double embark on an odyssey to make a name for themselves in the film industry during the Helter Skelter reign of terror in 1969 Los Angeles.
×
Facebook Twitter